Ever since my first trimester, or more accurately known as the carb-mester, I have been dreading the stupid test.  You see, the awesomeness of morning sickness, or more accurately, all the bloody time sickness, made it so I could essentially eat nothing but carbs.  That lead to a bit of an F it, I’m pregnant mentality which in turn meant I ate pretty much whateves.  Fast forward to now, and there has been minimal change in my dietary discipline.   I have a shirt that my wife bought me that says “Shattering Limits.”  Pretty certain it is supposed to mean physical limits since it is a Nike shirt, but aside from my personal limits, I am shattering limits on the scale.  Hitting numbers never seen in my life time!  Boom, right?  Yeah not so good.  First off, I’m getting pretty fat.  Or as my doctor calls it “pregnant.”  Considering that this sucker is going to have to fit in a uniform again somewhere down the road, so I need to sort myself out.  I only have the prego excuse for a few more months, then I’m screwed.

Aside from my fitness level, my wife has been concerned about my sugars.  There have been many discussions about gestational diabetes and setting myself up for that.  The past few weeks I have been reining it in, but then of course there was the whole Christmas thing.  With aches starting to appear and bending down becoming increasingly difficult, I knew it was time to start being “good” again.  Especially with the stupid test fast approaching.

After many conversations on the topic, my wife was convinced that I would fail the stupid test.  The one all pregnant women suffer through, where they make me drink some horrible substance and then poke me an hour later to see whether or not I will hate my diet until Skeletor pops out.  I meant to do an extremely low carb week before heading to the lab, but my wife laid down the hammer.  28 weeks had hit and I wasn’t allowed to ignore it anymore.

Much like my final exams this semester, I walked into this test not knowing exactly what I’d face, but knew I wouldn’t like it.  Luckily I had a town peep behind the counter to help lighten the mood.  She handed me the goods and gave me a five minute window to down it.  Fantastic.

The cocktail was a lovely orange color that reminded me of the old school McDonalds drink. It tasted just as awesome.  While trying not to spit it back out, I imagined that this was what a thawed out orange freezy would taste like, or maybe orange soda without the soda.   I would never had guessed finishing such a small bottle would have taken me the whole five minutes but it did, down to the wire.  The hard part was over, all that was left was to just a sit and wait.  An hour later, I just gave up some more blood and then I was done.   Again, like my finals, it was time for the long wait and cross my fingers hoping I passed 😂 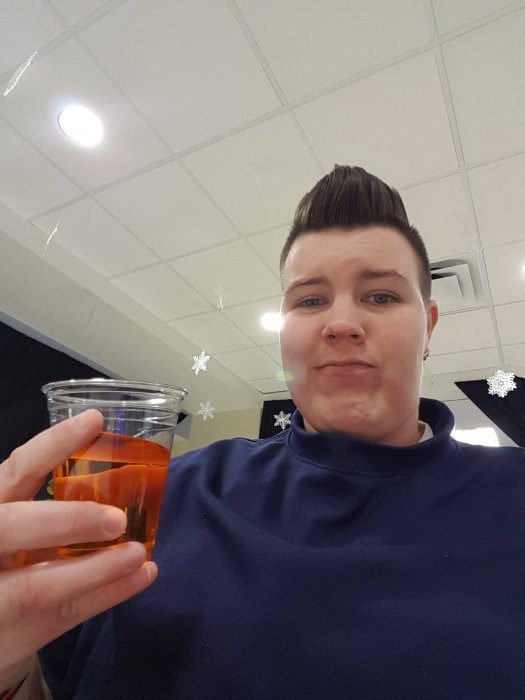 The next day I went back to the lab for my results, got them printed off and drove home to share the news.  I walked into the house with paper in hand.  My wife sat on the couch looking at me.  I held up the paper and exclaimed “Ha!”  Confused, she replied “Ha What?” “Scientific proof that I’m normal!” Well…at least normal in one sense.

Reviewing the results, I didn’t have a strong foundation to stand as I had just come in under the wire.  I had a 7.5 and the max was 7.7.  Naturally, I blamed the carbs I had eaten that morning as the reason for the heightened results, but a pass is still a pass.  Still, it was a close call and a good reason to sort my crap out.  Time to rein in those carbs 😉