After a day off, we made our way back to the doctors office for another peek and poke (bloodwork and TEI…argh).  The peek was conducted by another poor doc who had no idea what had walked in the door.  It was now day 8, the marbles were growing and I was definitely starting to feel it.  However, it’s not so horrible that it is the first thing I mention when someone asks me how I’m doing.

Mr Doc on the other hand asked how I was doing and when I dropped the socially acceptable “fine” it was clear that he was looking for more.  So, no bloating or discomfort?  I said, “Oh hell ya!  It’s clear that shit is going down in there, I figured you would update me on what that is.”  A grin busted out on his face at the same time as he couldn’t help but release a chuckle.  Always good when we start on a laugh, but then we got at it.

Apparently my ability to produce follicles was quite impressive and it was to the point that he stopped counting the stash.  They weren’t quite ready for harvest, but there were a shit ton of marbles on both sides and there is no wonder I wasn’t moving as quick these days.  After complimenting my ability to balloon my ovaries, he did break some news that I was not expecting.

Apparently my estrogen levels were getting pretty darn high, a problem I NEVER thought I would have in my life.  My body was being overly efficient and if my levels continued to climb, I would start spitting flowers, crapping tea sets, all while ordering princess dresses in bulk.  Oh yeah, and I would be at risk of getting OHSS.  I’m not one for clinical terms, but from the description of symptoms it sounds like it stands for Oh Hella Suckity Suck.  Needless to say, it sounded like hell and the doc wanted to do everything to avoid it.  This meant that instead of a fresh transfer, he suggested that we freeze whatever goodies are brewing and do the embryo transfer the following cycle.

Aaaargh!!!!  When I hear following cycle, I hear more time away from home and more time away from work.  For a ridiculous workaholic that can’t stand being out of the loop, paired with the fact that I am already scheduled to be away for far too long, this was not what I wanted to hear.  But Oh Hella Suckity Suck does not sound like it would improve matters and can actually cause the transfer to not even work!  It sounded like I was between Suckity Suck and a hard place, but we had time to reassess.

I was originally told to come back for a peek and poke in two days, by then got a call to come in the next day.  Yay, more proding… who wouldn’t be excited?  We went out again, for the fourth time in five days.  It was the same doc from the day before and he was prepared for me this time.  He asked me, “How about we check on what’s going on in there?” with a smile on his face.  I liked this guy, he got it.  He took a look and the goods were ready to roll.  Once again he was very impressed by the stores that I had produced and I explained that I have a reputation for going above and beyond. You give me a task and I knock it out, it’s what I do.  Once again, this produced a grin and it seemed like it was going to be fun working with this guy.  He said this was it, time to take the last couple trigger shots before the Dyson procedure.  The nurse was going to call me a bit later to tell me what time to pull the trigger, and then I’ll be golden until procedure day.  Well, except for the fact that I could feel the giant marble sacks just sitting there on both sides that were annoying the hell out of me…bet hey, step one was just about complete.

After serenading the pharmacy with Shots by LMFAO as they provided me with my trigger shots, we were on our way.  Please, please, PLEASE, let this work because I don’t want to do this crap again!  Peace out until Dyson day 😉 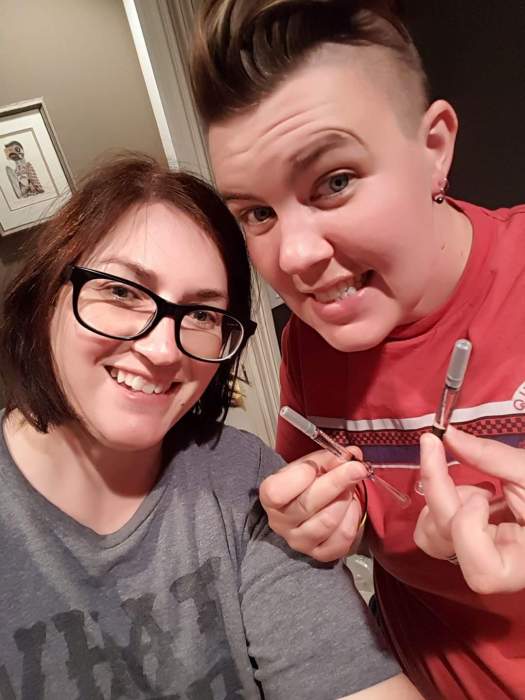