The countdown was on and my egg retrieval was set for the following day.  I had no medication to take, no needles to stab myself with, all I had to do was show up for a blood test in the morning and survive another day.  All in all, I was feeling fine, but occasionally the sacks of marbles like to make it known that they are in there.  The last count was roughly 20 marbles before we stopped counting.  Considering periods suck with just one egg, 20 plus has a tendency to be uncomfortable at times, but I can generally ignore it.  It’s the odd time that I need to slow down because it feels like my marbles are trying to break free, but I just buckle down, cuss them out and move on.  The words, “this is crap” have been coming out of my mouth more often as the days passed, but it was almost done!  This stage anyway.

After the blood test, we decided that it would be good to go to Science World.  We had a great friend down visiting, so this would be an awesome way to hang out with her, let child burn some energy and hopefully distract me from my stupid ovaries.  It was a nice day and a great break from it all and, although I felt like I overdid it a little, it was a great visit and fun day.  The night was spent recovering and dreading the following morning.

D-Day (…the other D, for Dyson).  In true small child fashion, my daughter woke me up several times throughout the night.  She must have read my pre-procedure instructions that said to get plenty of rest, and just laughed at it.  We dropped her off at Grandma’s and then we were on our way.  The instructions also said that I had to eat a good breakfast.  Every breakfast that week had waited until after the appointments as we were already waking up so darn early.  It was such a basic thing that we normally put off out of convenience, but we had to sort something out.  Neither of us had had McDonalds in several months, and we needed to make the long, traffic filled drive into town, so that would have to do for the “good” breakfast I was supposed to have.  I wasn’t complaining!  My little cheat day, I’ll take it.

We got to the clinic and I walked in like a boss.  I had this, and I was dressed for success 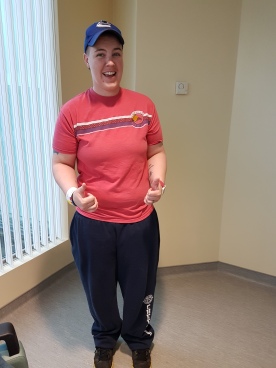 in my joggers, t-shirt and Canucks hat.  The egg retrieval power suit!  One of the nurses that I had seen pretty much every day that week came and welcomed us.  She warned me that her coffee hadn’t quite kicked in yet and I said, please, feel free to stab me with a needle then.  She laughed and said we had a little time until the IV was needed.  I was told that I needed to change into the skirt that they provided and then just relax.  I knew that I had time and did not want to put on this lovely olive green skirt just yet.  The nurse closed the curtain and looked to my wife.

“She said everything from the waist down, so yes!” in her stern, yet whispered direction as to not draw attention to our discussion.

“Take your pants off!” came at me in a whispered command.

“Easy now, you could as least compliment me or buy me breakfast before you expect me to just drop my pants.”

I’m pretty certain the eye roll could have been heard at that point.  I made one last effort to keep something left to protect my junk.  “How about I put it on and just keep my boxers on underneath?  That’s super quick to adjust accordingly when needed.”  The “Sue!” in response let me know that the discussion was over.  I had lost and was going to have to endure the fashion crisis ahead.  If only I knew I was going to be wearing olive, I wouldn’t have worn a red shirt.  The clash was blinding, and I realized then there were at least no mirrors in sight to catch this awesomeness.  I decided to own it and do my little hula dance, at which point my wife decided to document the occasion. 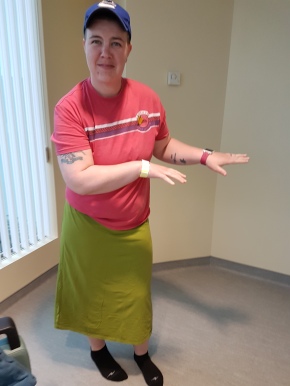 The nurse came back, sat down and asked if we were familiar with the procedure.  I explained that we had read the information sheets that they gave us, but that’s it.  She explained that when we went into the room, they would give me a local anesthetic by needle into the wall of my va-jay-jay.  I stopped her right there.  That crap was not in the info material they gave us!  She asked, why do you think we wait until you are here to bring out the big guns?  I may have said something along the lines of “you f@ckers” delivered with a big smile on my face of course as I shook my head at the ninja level of trickery.  First they convince me to wear this skirt thing, then I start to relax in the comfy chair, it was all a trap!   We moved on to hear about the rest of the awesomeness that was to come and the fact that they were going to dope me up.  Apparently they were going to give me ativan, to help me calm down (meanwhile my BP was regular throughout) and then fentanyl to help with the pain inside.  I joked because this popo was about to “experiment” with drugs!  I just hoped that they didn’t make me feel like ass because I hate having anything playing with my brain.

The coffee kicked in for the nurse a little while later and she was able to put my IV in without hurting too much.  She asked if I had drank a lot of water that morning (on the to-do list).  I told her I drank some water which is an improvement to the rest of the week.  She then asked about breakfast and I answered that I had a breakfast, not necessarily a good breakfast, which again was an upgrade to every other morning that week.  She just smiled and shook her head.

Shortly after, it was game time.  I was walked to the room where I saw the same doc that I’ve been dealing with for the majority of the week.  Right away I asked him what lottery he won to be able to see me so much in one week.  He said that he just gets lucky some times.  I walked around the torture chair which was set up to look comfy, but the stirrups give away that it was not going to be fun.  I mooned my wife as I was getting into position just for fun.  Then I was told to put my legs up in the fun stirrups, and within moments I found myself just out there!  This poor lady had the job of going around my strategically positioned legs to put up the blue sheets to ensure that the doc could literally focus on nothing else but my hooha.  This prude’s worse nightmare!  He started to raise the bed and then, like any polite doctor he asked, “are you comfortable?”  Clearly he forgot, for just a moment, who he was dealing with.  I told him, “Have you sat in this chair?  I’m set up with my junk in the wind for everyone to see.  You should really try it, just for the experience.”  He stopped was he was doing, dropped his head and had his laugh.  Yup, he remembered who he was dealing with.  After a quick recovery, he continued on and said “Touche! Maybe I should try it some time to get the full experience.”  With that, it was on.

The nurse put in the drugs and I very quickly informed them that their ceiling was broken as it would not stop moving.  They should get that fixed.  The doc said that the ceiling might be broken, but at least the drugs were working.  The monitor was ready to roll and he gave me a heads up that the Dyson was ready to roll.  He rolled into the one side and started cleaning house.  It wasn’t horrible, but I was definitely reminded that there was a vacuum up my hooha when he had to dig into the corners to get the marbles that were hiding.  The corner digging definitely came with a lot of cussing and I may have said, “Get out you mother f@ckers!”   Luckily we moved on to the next one pretty quick which gave me a little bit of a break.  The second side had a bit higher occupancy level and they had some big marbles chilling in there.  It was generally fine until they started hiding in the stupid corners again.  The more cuss words came out the deeper they would hide but it was over soon enough.

The early count was 18 eggs, but they were still working their way through the goo that they were sucking out of me.  Meanwhile, I got the VIP treatment and wheel chaired back to my corner room.  Once back in the room, my wife so willingly made a run to Starbucks to get me coffee and a snack to make me feel better.  They needed to monitor me for a while to make sure…you know…I don’t die or anything.  My wife made it back quickly with the goods and finally I could have some caffeine to counteract these damn drugs that I no longer required in my system, thank you very much.  I also immediately started the campaign to put pants on.  Apparently they were concerned that if I bent down to do this, I might face plant and die, but I felt that putting on pants was worth the risk.  I got changed, threw my garmin back on and started upping my step count as I paced the room.  The nurses were shaking their heads as the person who went first wasn’t even stirring as much as this chick.  The nurse walked in and asked if I would like to go home and I jumped all over that.  Bracelets were snipped, IV was out, time to roll.  Oh yeah, and before we hit the road, the doc came in to give us the final count.  28 eggs baby, talk about exceeding expectations.   No wonder I was hurting so much the past couple days.

My wife took me home and arranged for me to just rest.  Since I got such limited sleep the night before, I took advantage of the nap options.  This proved to work to my disadvantage as when my wife called, I tried to get up and could barely move.  Apparently when you stick a vacuum up your hooha and suck out a chunk of goodies, it really screws you up a bit.  By the time she got home I was ready to roll and we decided that we needed to go out for food.  We went to a local pub and I was not moving quick by any means as I limped toward the front door, several steps behind my wife.  She stopped and said that my theme song was playing.  It took two seconds for me to realize that the Beach Boys song, I Get Around was playing outside the pub.  I started laughing which caused me to almost fall down in pain.  After I recovered I paused for a slow clap as she deserved it with that one.  Finally after dinner, I insisted on hitting the drive thru for an Oreo McFlurry with Caramel sauce.  I don’t care that I can barely move, you better believe that I earned my damn McFlurry!  Time to rest and hopefully feel better soon.  We’ll find out how many of those marbles get fertilized the next day.